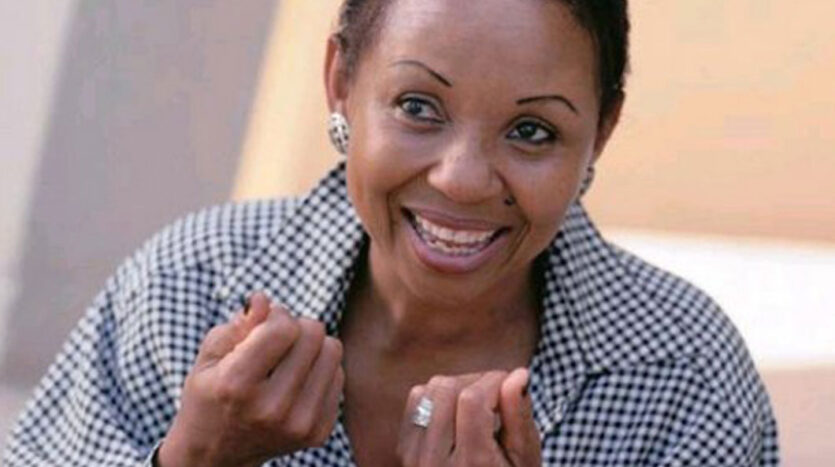 Nomsa Nene is in the spotlight again. Nowadays, the popular television and stage actress hosts her own show days; as a top-selling estate agent in Killarney and Riviera.

Nomsa Nene recreated herself as a top estate agent.

Nene’s life as an estate agent began in the same manner as her acting career: with a great deal of chutzpah.

The host of the Zama Zama game, veteran singer, dancer, actress, puppeteer, presenter, producer, estate agent and community environmentalist, was born more than 50 years ago, to an Anglican family in Soweto’s Orlando East.

I started working as an actress when I was eight months old. My mother tells me I would crawl onto the table and turn around, wiggle my backside at grown ups and try to dance. I loved the attention so much that if I was placed back on the floor I would sit immobile and sulk” — she admits.

Nene knew from six years old when her father took her to film agencies to pose for adverts that one day she would be a professional actress.

After matriculating, Nene auditioned for the stage version of Die Swerfjare van Poppie Nongena, landed the leading role and became the first lead black actress at the Market Theatre, opening the door to all blacks in theatre. She played in the acclaimed Poppie Nongena nationally and off Broadway in New York, winning the first of many acting awards.

Again, I was a trailblazer as the first lead black actress. Before then they would paint white actresses black”

At Grahamstown Festivals the inexhaustible Nene played nine roles in 10 days, rehearsing by day and performing at night. Unstoppable, by her late twenties Nene had married and divorced twice, commentated for SABC at the Oscars in Los Angeles, in 1994 and 1995, and was a household name as Phindi in the soapie of the same name, where she brought audiences to tears daily.

Nene hosted the popular morning programme The Toasty Show, waking at 3 am to perform between 6am and 8am, and later, while hosting the Zama Zama show, even did a stint producing her own TV sex talk show.

Zama, Zama was doing really well in 2001, when, with no prior warning, I was informed that my contract was to be ter minated within seven days. Lotto was about to launch instead. I didn’t know what to do, but I had to start earning income instantly.

She did as always; followed her heart and applied for a position as an estate agent at the then-highly reputed Wendy Machanik Properties.

Eish, I love property so much. In my street I grew up wishing I had my own room. I loved the idea of selling houses with separate rooms. Seven of us lived in Orlando East in a two-room house with an outside toilet. It’s still outside

As she became known in the industry she sold many flats and sectional title homes. In 2003 she sold 45 units, winning awards at Wendy Machanik Properties. She continued winning property awards every year until 2010, when the company was suddenly liquidated.

Again, relying on her ingenuity, passion and sheer nerve, she immediately recreated herself as the sole owner of Nomsa Nene Properties.

Today she is a top-selling agent in her area.

I thank Wendy Machanik Properties for mentoring and training me. And, of course, my clients for their loyalty and support.

Will she ever return to acting?

Acting and life in Soweto are in my blood. I would love to return to the stage if I had time and a huge starring role.”

Nomsa Nene interviewed by 702: What in the World Happened to….
Nomsa Nene Properties at Home & Lifestyle Expo for everyone- featured in Rosebank Killarney Gazette
Sign into your account
Create an account
Reset Password
Register here! Forgot Password? Back to Login Return to Login